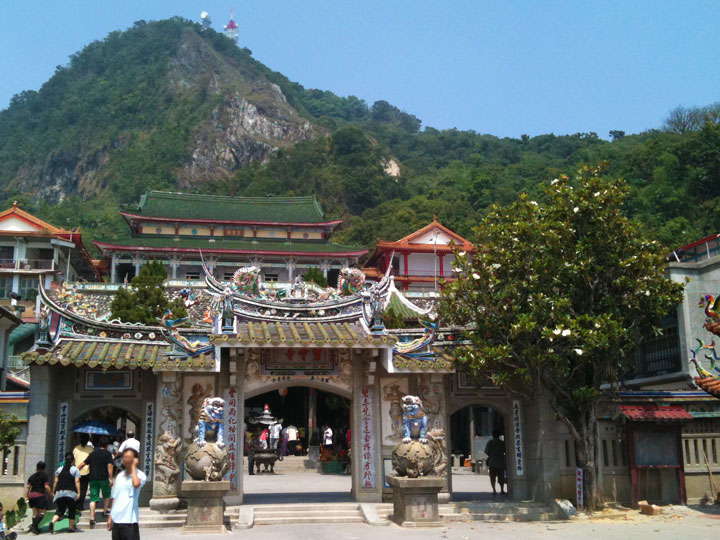 The original name of Biyun Temple was Volcano Temple, located on the south hill of Pillow Mountain in Tainan. The temple is a religion fusion of Buddhist, Daoist and traditional Taiwanese folks. The architect is a mixture of Japanese and Taiwanese. Former President Chiang Kai-Shek sign boarded the temple as “Lin Shao Treasure Palace”. It was designated as a class three historical monument later in 1997.

Biyun Temple is situated on the higher ground in the GuanZiLing Scenic Area with spectacular view of the mountain range landscape. The temple is 5 km away from Dasian Temple and 1 km from the Water and Fire Cave, all easy access by mountain expressway. The beautiful view is astonishing and elegant, typical Chinese mountain scenery. The gate of the temple is ancient and classy. The famous rice cave is right beside the gate. The story has it, the rice cave was known for providing rice out of nowhere but the truth was the monks hid the rice in the cave during the war, and was seen and mistaken by the locals ever since. Natural potable spring water behind the temple is free to gather near the mythical wind stone. Biyun Park is right in front of the temple, a Guanyin Statue sculpted by Jade in located in the the park. The wooden hike route connecting the plaza and the temple provides a great view while hiking.

Hot Spring, LinDing Park, Water and Fire Cave, Biyun Temple, and Dasian Temple are all popular attractions in Tainan. The GuanLing Cloud Rock is a nickname for the whole area including hot spring and the temples. All with clear and beautiful mountain range views. It’s one of the main attractions and must visits in Tainan.

Directions:
By Car
Take Highway no.1 exit on HsinYing or SuiShan Interchange
Head east onto Provincial Highway no.1
Switch onto no.172 County Road head for Dasian Temple

Take Highway no.3 exit on BaiHe Interchange
Switch onto no.172 County Road head for GuanZiLing