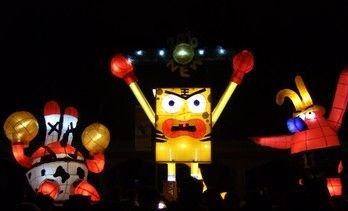 Earlier this year, Lugang (Lukang) of Changhua County was selected to host the 23rd, Taiwan Lantern Festival in February 2012, according to the officials, Lugang (Lukang) beat other cities including Keelung and Taoyuan due to its rich history, folk customs and architectural assets in the area.

The Lantern Festival is held annually on the 15th day of the first lunar month, marking the grand finale of the Lunar New Year season and is celebrated with such festival. Fireworks, giant lanterns and hand held torches are seen all over the festival to welcome the New Year in a spirit of peace, prosperity and joy.

Each year, the festival follows a theme based on the Chinese zodiac animals for the year, and for 2012, as year of the Dragon, the main lantern for the festival will be in the form of a dragon, complemented by secondary lanterns and areas highlighting different decorative lantern themes, including the Blessing lantern area, Joyous area and the kids area. The event will open with stage performances by well-known local and international artists and vendors surrounding the festival.

Make sure you don’t miss out this 2012 Lantern Festival at Lugang (Lukang), Changhua County and book for your discounted Changhua accommodation with us at Sinotour.com today!