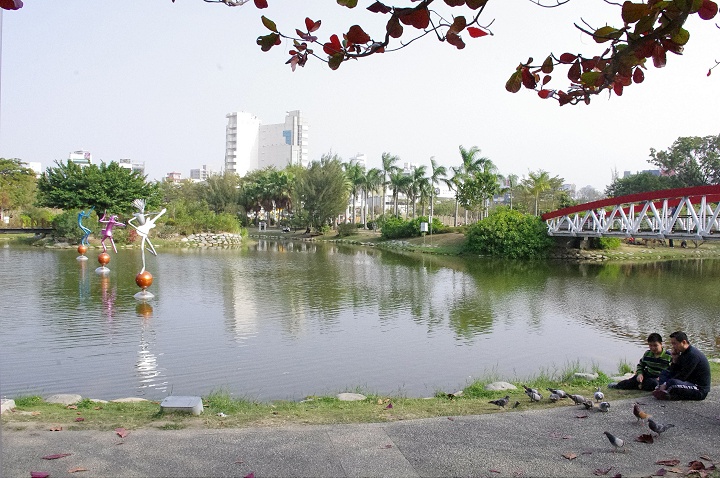 Being a heavy industrial city in the old days, the Kaohsiung City Government had several city plans to rebuild the city’s image for making it a healthy and highly livable metropolis. As part of the city plans, the park has undergone several transformations with beautiful greeneries and recreational facilities, as well as self-service bike rental machines installed to provide an oasis for the urbanites to enjoy a sense of tranquility and relaxation.

Stroll along the riverbanks of the park, visitors may see many elders having a relaxing time idly sipping tea or playing chess at the Speech Square as the quick pace of life unfolds around them. As a beautiful park in the metropolis with many well-designed features, the park is often used for filming of Taiwan TV series such as Black & White.

Kaohsiung Central Park forms a lovely scene in the metropolis with children running freely with laughter, elders sipping tea idly, couples strolling hand-in-hand, and people resting next to the riverbanks calmly. The relaxing atmosphere of the park is a strong contrast from the busy city life surrounded. Discover the tenders and charms of the Kaohsiung Central Park for a delightful Kaohsiung travel.

KMRT Central Park Station is a two-level underground station, the Central Park stop was designed by British architect Richard Rogers. Design-wise, purple is the pervading color throughout the station. The courtyard grass areas, in turn, are covered in a slope of yellow windmills shaped like sunflowers. The Central Park Station of KMRT was placed 4th in the top 15 list.

While visiting the Kaohsiung Central Park at Exit 1 of KMRT Central Park Station, visitors are also recommended to appreciate the light artworks at Urban Spotlight, and do shopping at Shinkuchan Entertainment District and President Department Store at Exit 2 plus Wufu Shopping District at Exit 3 for a memorable Taiwan holiday.
Please visit Kaohsiung Travel on TravelKing for more information on Kaohsiung.