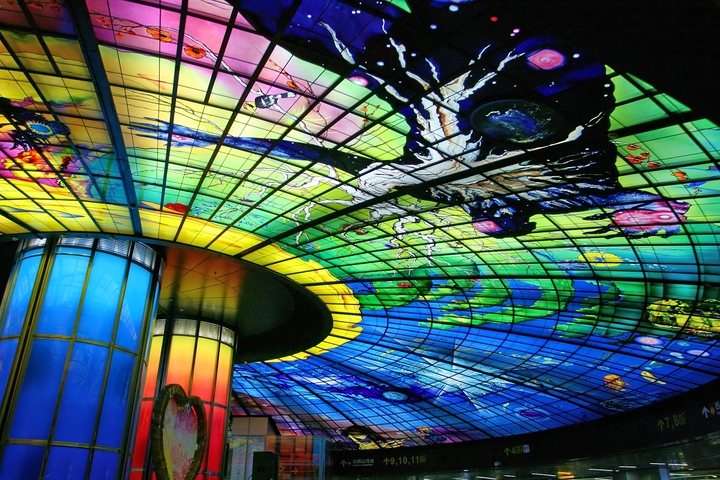 The KMRT O5/R10 Formosa Boulevard Station is located at the intersection of Jhongjheng Road and Jhongshan Road. It is also called the “heart of Kaohsiung MAss Rapid Transit (KMRT)” because it is the transport station of red line and orange line. This station is currently the largest round-shaped station in the world. The main exits with shell-shape were designed by a Japanese architect, Shin Takamatsu. It is a remembrance of the Formosa Incident.

In addition to being the place where the Red and Orange subway lines meet, the station is also the location of the “Dome of Light”. The “Dome of Light” is featured on the upper part of the station, is known as the biggest public art installation all over the world. The author Narcissus Quagliata puts together the dome in a little less than four years, which including shipping art pieces of colored glass directly from Germany. The amazing art piece spans a 30-meter diameter, as visitors walk around, views of story of human life, transitioning from the section that represents water, the womb of life, to earth, which embodies the act of growing and prospering are to be seen. There are also sections on light and fire, the latter representing on the one hand destruction and on the latter rebirth. The main message that pervades the dome, however, is one of love and tolerance.

Other stations around the world that were in the list were Champ-de-Mars Station in Montreal, Canada coming 1st, T-Centralen Station in Stockholm, Sweden in 3rd, Bayview Station in Toronto, Canada in 5th, Bockenheimer Warte Station in Frankfurt, Germany in 6th, Bund Sightseeing Tunnel in Shanghai, China in 7th, Slavyansky Bulvar Station in Moscow, Russia in 8th, Kennington Station in London, UK in 9th, Changi Airport MRT Station in Singapore in 10th, Zoloti Vorota Station in Kiev, Ukraine in 11th, Olaias Station in Lisbon, Portugal in 12th, Puhung Station in Pyongyang, North Korea in 13th, Federal Triangle Station in Washington D.C., USA in 14th and Kirovsky Zavod Station in St. Petersburg, Russia in the 15th place overall.